This amazing story of family, faith, and hope was written by my friend, Aleah Stenberg and published in The West Sherburne Tribune  for Mother's Day this year :

CINDY'S HEART IS HAPPY WHEN HER HOUSE IS FULL
Contributing Writer:Aleah Stenberg 5/5/2016 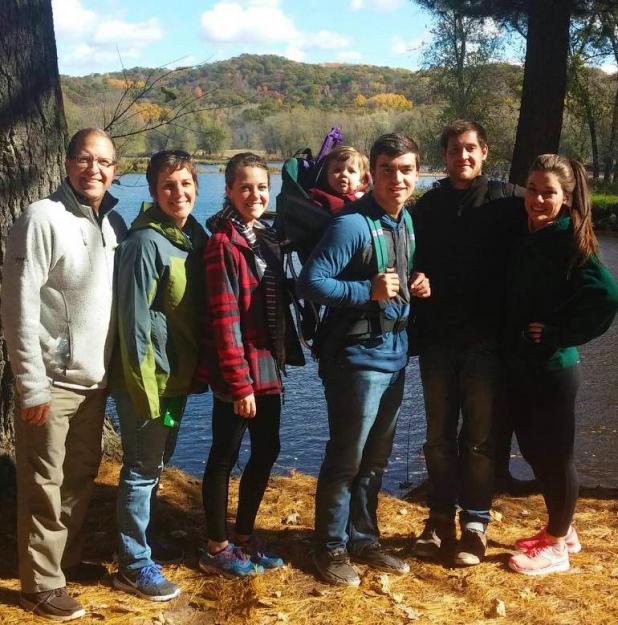 The Heltemes clan on a hike in William O'Brien State Park on the St. Croix River in October 2015. Left to right are Jeff, Cindy, and Melissa. Alex is carrying Noah on his back next to Chris and his girlfriend Brook Sullivan. (Submitted photo)

On Sunday, mothers will be lavished with lovely gifts. Chocolates and roses will be delivered with Hallmark or handmade cards. Jewelry in dainty boxes or greenhouse plants in colorful pots will bring smiles to Mom's face. Tiny girls in flouncy dresses and little boys in bow ties will stop to take a family photo with Mom after a fancy brunch. While the second Sunday in May is a day wrapped in cellophane and ribbons, the job of a mother is not always pretty or glamorous. Many times, motherhood is fraught with trials, heartbreak, and uncertainty.

A Mother's Day snapshot of the Heltemes family would show a smiling family recently moved into a new home. Center would be Jeff and Cindy, surrounded by their 17 year old son Alex; their daughter Melissa, who lives in Becker with her husband and 18-month-year-old son; and, possibly, the oldest son, Chris, visiting from the East Coast. What a picture cannot capture, however, is the story behind their smiles.
Dreams of Motherhood

Cindy Heltemes has always wanted to be a mother. Even as a little girl growing up in a family with five girls, she always wanted to have seven kids of her own. "I wanted to have a full house. I don't always like the mess and cooking all the time, but my heart is happy when my house is full," reflected Heltemes, who has raised four children since then and has also opened her home and her heart for foster children, nieces and nephews. It's been a long road from dreaming of her future family to the children and grandchild she has today - a road filled with both joy, heartbreak, faith, and prayer.

Cindy began her mothering career differently than planned. She started as a single mom for nine years after being raped at a party at the age of 20. Devastated, she planned to give her baby up for adoption. During the second half of her pregnancy, however, she knew she would keep the child. She was falling in love with the baby she was carrying that would eventually be named Luke when he entered the world. "As Luke grew, I could feel him moving. You fall in love with your baby before it's even born because it's growing inside you," remembered Heltemes. "When you become a mom, nothing is ever the same again. All of a sudden, the lens you've looked through all your life changes. It all focuses on your child."

Cindy spent many years as a single mom, just her and Luke. Then Cindy met Jeff Heltemes and they married when Luke was nine. Jeff had two children of his own from a previous marriage, Chris, six and Melissa, five. The five of them instantly bonded as a family and all the children were excited for the wedding. "I remember that day. Luke finally got to call Jeff 'Dad', and Chris and Melissa were finally able to call me 'Mom'. We were married and this was our family and this was what it was. I've never introduced them as my stepchildren. Luke and Chris bonded like brothers right away. I knew it went amazingly well; it was the grace of God," said Heltemes.

Five years later, the Heltemes family encountered a tragedy that affected the whole family. Luke, then 14, was visiting Cindy's sister in Fairbanks,  AK when he had a massive headache in the shower the morning he was to fly back to Minnesota. Cindy's sister called the ambulance, but by the time the medics arrived, Luke was not breathing and losing consciousness. At the ER, it was soon decided that Luke needed to be airlifted to Anchorage to see a neurosurgeon. What they did not know yet, was that Luke was suffering a hypertensive cerebral hemorrhage, meaning one of the blood vessels going to his brain burst. As the blood collected in the back of Luke's head, his body was shutting his organs down.

"When the doctor said, 'Occasionally, they survive,' that's when I knew he was dying," remembers Heltemes. Jeff and Cindy then flew to Anchorage, in the hopes that Luke was in transit there. At the gate, two college students graciously traded tickets with them for the earlier sold-out flight, bumping their departure time to noon, instead of 5 p.m.
Halfway through the six hour flight, Cindy was finally able to reach a doctor on the phone about Luke's location and condition. The doctor's report was grim: "I've been doing CPR for 45 minutes on your son and I need someone's permission to stop."

In that moment, Cindy felt God saying, "Just let him go." For the rest of the flight, Jeff and Cindy knew they would never see their son alive again. "We just sat there with our Bibles in our laps."  When Jeff and Cindy finally reached the hospital, Luke was gone. But the nurses had kept blankets on his body so he still felt warm.

The devastation of Luke's death rocked the Heltemes family, especially Cindy as the mom. "We had to figure out how this works with a loving God. How could God just let your worst nightmare come true?" questioned Heltemes. "I remember God saying to me, 'You have two roads, and I will love you no matter what you choose: one is bitterness, hurt, and brokenness; the other is looking for joy."

Cindy decided to seek joy. She started by doing a Bible search on the subject, and she found that joy has nothing to do with what your circumstances are. She chose to find joy anew each morning.
Finding Joy

Cindy did find joy. One of the ways joy manifested itself was when Cindy became pregnant with her son Alex. Her favorite Mother's Day present was a red Radio Flyer wagon filled with plants for the garden that she received the May before Alex was born. The wagon was such a hopeful symbol for her coming child, and now she pulls her grandson, Noah, around in it.

Alex is now a junior at BLHS. Chris and Melissa are grown and out of the house. Cindy wants them, and any other child she has invested in, to become independent but also to always have the assurance of love. "Above all else, you are loved," Heltemes wants her children to know. "You will never be perfect and that's ok. That's what unconditional love is. Just because we get bigger doesn't mean that we don't need that assurance and that unconditional love." Cindy knows that unconditional love does not simply stem from limited human emotion. She regards that kind of love as something that only comes from God.

"I love my kids this much. How much more does God love them and us? It is such a sweet parallel in how God loves his children and then how we are able to love our children. You want to bless them, to help them, and to go through trials and come out on the other side. God does the same thing for us, just more miraculously and extravagantly."
Heltemes has found joy in watching her children embrace who they are and to see them bloom. She delights in watching Melissa enter motherhood and being blown away at what a wonderful mother her daughter has become.

While Cindy readily admits that she is not perfect, she has always striven to make the best decision that she could at the time with the resources she had. Over the years she has become older, wiser, and calmer, realizing that parenting needs to be more fluid rather than sticking to strict rules.

Another thing that Cindy recommends is praying for your kids and also for yourself as a parent. "I pray for discernment and wisdom all the time because it's hard raising kids since it's a fluid thing. I'm just always praying for wisdom because if it were up to me it would be a big mess," asserted Heltemes.

Cindy's life experiences have put her in a unique situation to help others who have lost children and she has led support groups for people dealing with these crises. "Every time I hear of a child dying, my heart just breaks for them, especially for that mother because it is so devastating."

Even though it has been almost a decade since Luke's death, Cindy still misses him. "He's still my kid. I never stop thinking about him. There are days I miss him so much and other days I'm ok. As a parent, you never think you'll have to say goodbye to your kid and it feels so wrong to have it that way. I know I'll see him in heaven, but I feel kind of robbed."

Luke is buried in Big Lake, but Cindy does not visit the gravesite as frequently because she knows Luke is not there. His spirit is in heaven and visiting the cemetery was not comforting anymore. Recently, the Heltemes family moved after living over 20 years in their house in Big Lake. While the new home is beautiful, the transition is bittersweet, as Cindy will never have any memories of Luke there. What helps the most is people sharing stories about Luke. "Mostly, I love talking about him. I love hearing people tell stories about him. We will never have any more memories of him, so any memories that anyone can share are precious. I think that is universal. Everyone I've met loves to hear stories about their child."

Even through the trials, difficulties, and heartbreak of motherhood, Heltemes still loves being able to show unconditional love, to nurture growth, and to have a full house, even if it does mean a lot of cooking and cleaning.
"I love being a mom. Whether I gave birth to them or they grew up in my home, I love kids. I would take in just about anybody's kids if they needed a place. I can't imagine having a child not growing up in a loving home. That is just heartbreaking to me."

Reexamining the Heltemes Mother's Day photo reveals Cindy as a pillar alongside her husband Jeff, surrounded by Chris, Alex, and Melissa with her husband and son. Closer inspection reveals more faces in the photo. Luke stands smiling next to his mom, foster children occupy the front row, and nieces and nephews that the Heltemes family took in to live with them squeeze in on the sides.

This substantial group has benefited from Cindy's unconditional love through both the big things and the everyday things. Not wanting anyone to think she is some kind of Supermom, Heltemes is quick to admit, "I'm not perfect. I'm just doing the best I can every day."

What wonderful advice: to do the best we can every day. To the millions of mothers who give their best to their families daily, we thank you. We honor you for your sacrifices, your time, your joy, your investment, and your lives.

Thank you moms, for always doing your best every day.
Posted by Joyful Noise Ministries on 11:45 AM