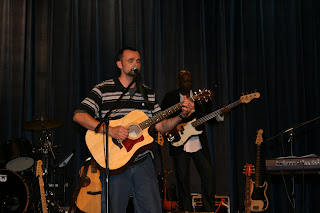 When I first met Josh Corbett, he explained that he's serving as a youth director at Rosemount United Methodist Church...in ministry again. I say "again" because this has been a recurring theme in his career: After years of seeking and being unable to find a teaching job in the public sector, God had again called him to ministry...before, there was the Christian Camp counselor role...and a job in Wisconsin working with a youth ministry...and others...

And by his side through his search for a career in teaching was his wife Kara who is someone very aware that God had Josh by the coat tails and wasn't going to let him become a secular teacher in the public schools.


And also ...there was the Christian Band he used to play in...before kids, before he thought he should get a real job! Since that time in the band had passed, all he had really done with his music was compose and sing to himself in the basement. Even Kara had yet to be an audience for this "closet" songwriter.

A friend, Tim Lemmens, full time Christian songwriter and performer, and friend of Joyful Noise Ministries, who knew Josh from the "old days", recently asked him what he'd done with the music he'd started to write so long ago. When Josh couldn't give Tim a clear answer how he was using what God had given him, Tim suggested Josh get in touch with us.

What we saw and heard in his songs were lyrics which were lessons about life, crafted from personal experience, full of palpable emotions, and underscored by an unshakable faith and articulate, percussive guitar accompaniment that uplifted those who were hearing and seeing this work of his heart.


Within 3 months, Josh performed a few of his songs publically for the first time as a short opening for one of Tim's concerts, and soon after, he was asked to provide worship experience and special music for a church hosted weekend retreat. He brought along a few "ministry cards" that weekend, and the rest, as they say, is history. The next email I received from Josh had as it's subject line: "Now, what do I do...they want me to..."


We're now helping Josh create his ministry materials, create his demo (and compile material for his first album). We're also helping him assemble his accountability team to provide Josh with a resource to help him keep is ministry clearly focused.

Josh is on God's path now with an understanding of his calling in music ministry and God is affirming his new found direction by blessing his ministry.


All this has happened, we believe, because Josh had the courage to be confronted by and thoughtfully answering our two key questions we pose at the beginning of our music ministry development training:


What are you doing with the gifts God has given you, and Who are you bringing with you to heaven as a result?

By the way, that's George Moye in the photo playing bass for Josh. George is one the Twins Cities finest professional bass players...you can learn more about George at his web site: http://www.georgemoye.com/
Posted by Joyful Noise Ministries on 11:10 PM

Wow! How exciting. Can't wait to see what God will do through his ministry!